It’s unusual that N——’s and my days off coincide. I get normal weekends, but she has a six day schedule that changes every week. However, we both had Saturday and Sunday off, and decided to travel to Shikoku for the weekend on the basis that neither of us had ever been there, and it wasn’t too far away—important for a two day excursion.

Shikoku is the smallest of the four main islands of Japan and somewhat isolated, culturally and economically. However, it’s very easy and cheap to reach from Osaka. One hour by train from my local station to Wakayama port, followed by two hours on a ferry, and you reach Tokushima. 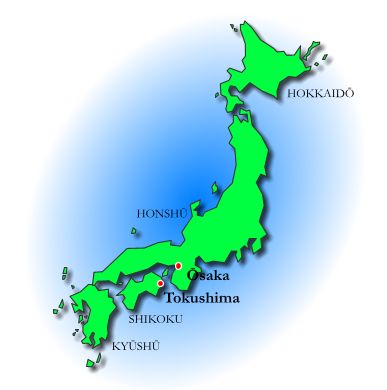 In Japanese fashion, the ferry didn’t have rows of hard plastic seating or anything like that. Instead, they had raised areas of soft, carpeted floor to sit or lie on, and pillows for resting your head. On the way back, I was particularly glad about that; lying back, closing your eyes and dozing must be one of the few ways to have a tolerable ride on choppy seas. I didn’t feel sick once, an experience quite removed from the last time I took a ferry across the English Channel.

It’s strange, really. A Western operator would go to great expense installing large numbers of seats to produce a less comfortable result. Without the cultural imperative to remove one’s shoes, however, it wouldn’t work as well, I suppose, and it might be a bit alien for people not accustomed to sitting on the floor (as I discovered when my brother visited my flat, furnished as it is with a low table and a few cushions). Granted, it did look a bit refugeee-class with all the people lying on the floor like escapees from a natural disaster, but I liked it.

So...Shikoku. Well, I only saw a little of it, but it’s a lot more rural than Osaka. As is most of the world, of course, but it still comes as a shock. So much of my experience of Japan has been in an urban environment that, when I travel to the less relentlessly developed parts of the country, I’m forced to think that I might have a mistaken opinion of what Japan is really like, based on a very limited data set. From a European perspective, the Japanese countryside is probably a lot less foreign and strange than the cities. Without the ubiquitous frequent and reliable public transport services or high-rise buildings, it’s very different to ultra-urban Tokyo or Osaka or even second-tier metropoles such as Nagoya. 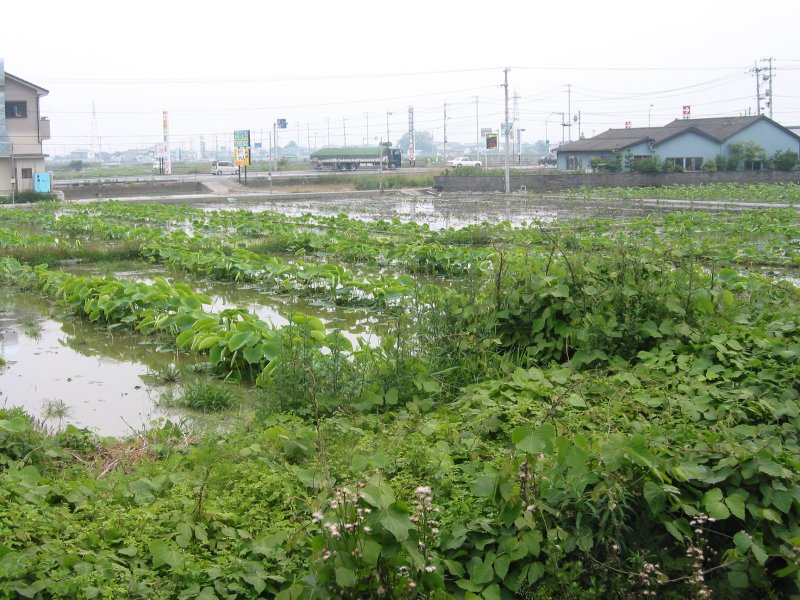 The trains were almost as bad as those in Britain. Infrequent, slow, and inefficient. No automated barriers; instead, a person to check the tickets at the departure and arrival stations, and another to check them on the train in case someone had sneaked on at the ten metres of concrete that called itself a station at one of the rural stops along the track. On a forty-five minute journey from Tokushima to Naruto, the train stopped for four or five minutes at each station. In other words, the journey time would have been nearer twenty minutes without these stops, necessary to allow the oncoming train to clear the single track. At Naruto, the entire day’s timetable was displayed above the gate on a single board. Not an automated display either; this was fixed signage. As you can probably infer from that, it wasn’t a busy station. 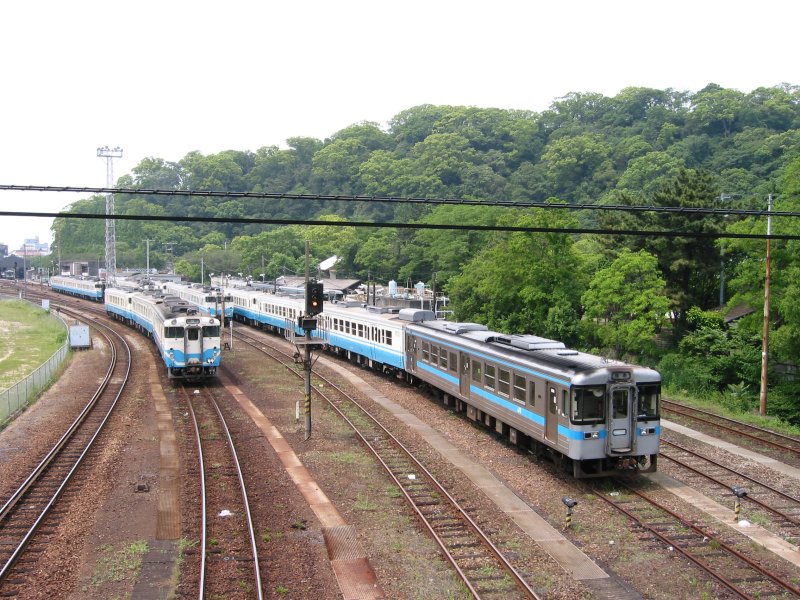 Due, no doubt, to the lack of effective public transport, the road layout is optimised for cars, to the detriment of pedestrians. There are few crossings; instead, there are many footbridges. However, forcing the pedestrian up and down fifty or sixty steps just to cross two lanes of traffic is, I feel, a little unkind. Especially so in a country that gets as humid as Japan does in the summer. However, having lived in Birmingham (motorways through the city centre!) I can say that pedestrian-hostile environments are not the exclusive domain of road planners in Shikoku.

The ryokan was comfortable; they usually are. It was fairly expensive, but that including an enormous dinner served in the room and an equally enormous breakfast featuring a wide variety of things from the sea, and the usual courtesy minibus to and from the nearest station. We were even luckier, because the driver, upon being told of our intention to catch a bus to the Naruto Channel, drove us straight there. It was only fifteen minutes by car, and travelling directly saved a lot of time, considering the infrequent public transport previously mentioned.

This is what we went to see at the Naruto Channel: the whirlpools that result from water being forced through the narrow gap by the tide twice a day. 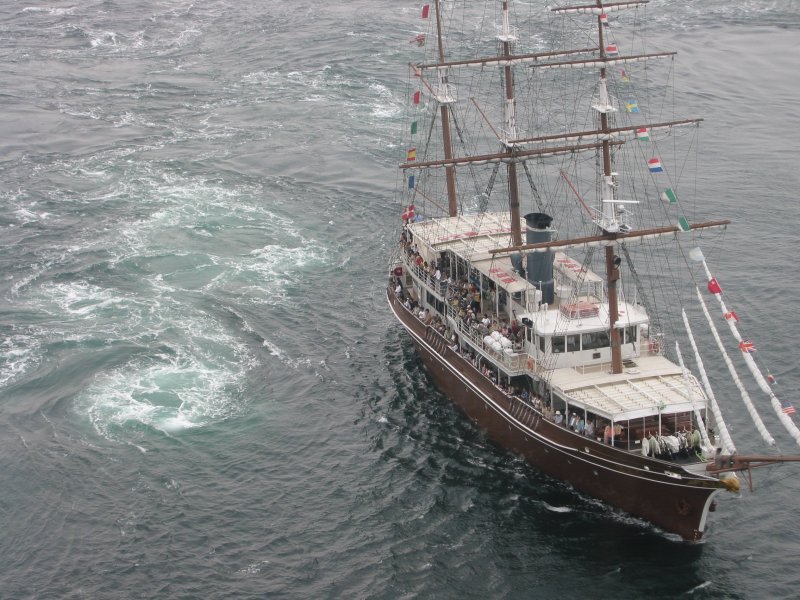 You can take one of a number of boat trips out to see them; we viewed the whirlpools from directly above, from the platform on the new bridge. However, the best view of them was to be had from the beach, from where the the many whirlpools could be seen unobstructed, fanning out in a pair of spiralling fractal Koch curves.

In two days, and relying on the vagaries of public transport, we only scratched the surface of Shikoku, but I got the feeling that there may be a lot of Japan that I have missed so far. Where’s next...?