A different kind of bicycle drama this week. I was half asleep on the sofa when a loud bang roused me. This was followed by a hissing that alerted me to the cause: the rubber around the valve stem of my Brompton wheel had split and the valve was no longer connected to the tube. 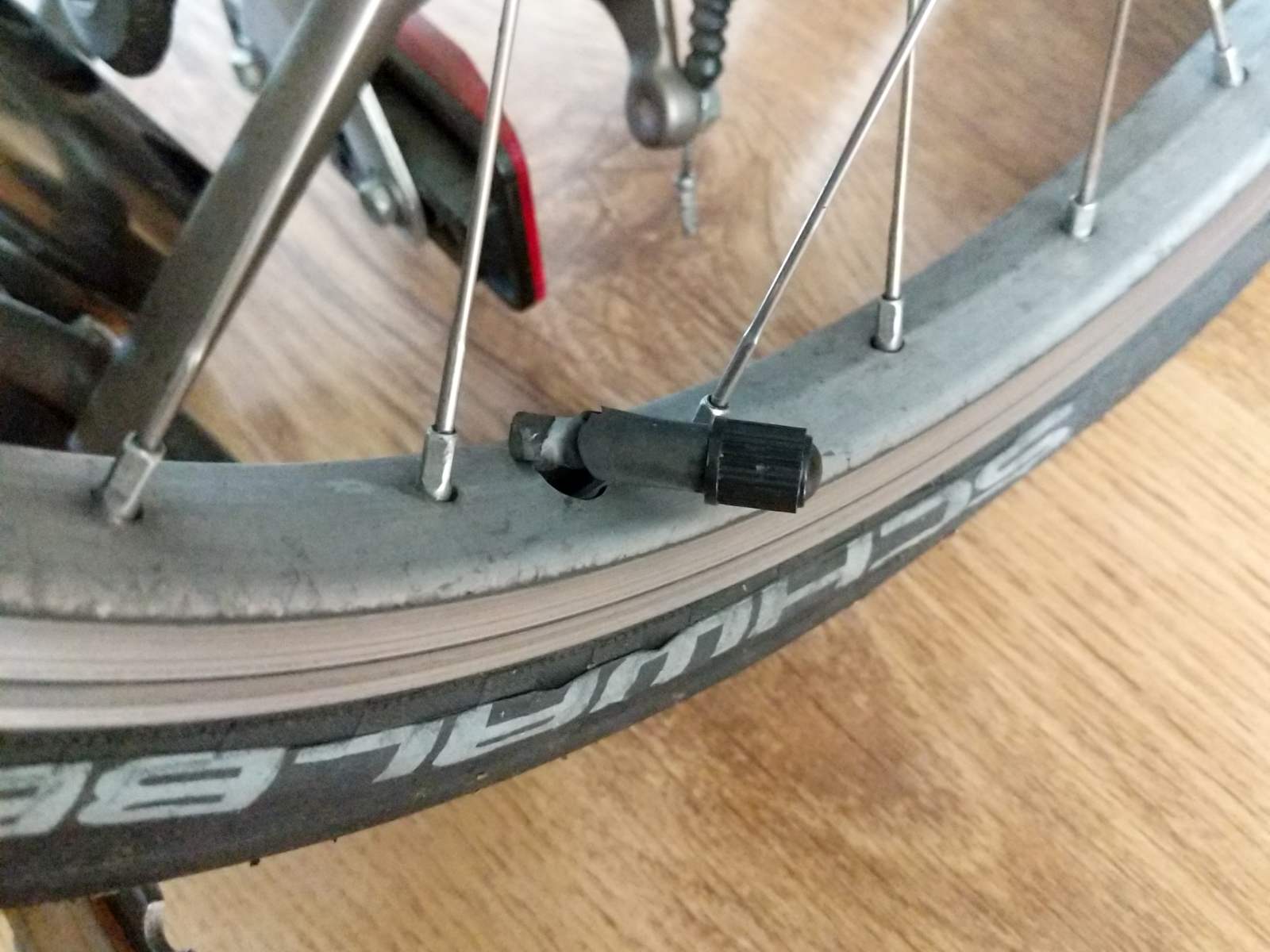 I’m glad it happened then and not a couple of hours earlier when I was riding it.

I don’t know if the rim cut into the rubber, but I usually use Schwalbe inner tubes that have an entirely metal valve stem, and that’s what I’ll be replacing it with.

I repaired a cassette recorder with what felt like keyhole surgery. I’d bought it second hand on eBay, allegedly in “full working order”. It wasn’t: rewind and fast forward didn’t work. I complained and the vendor gave me a full refund of the £10 I paid for it. I bought a set of replacement belts for £7 and set about repairing it. The hard part was that the belts are underneath the circuit board, and the circuit board is held down by wires on three sides. I could just have unsoldered the wires and resoldered them, but I managed to avoid that by unhooking the wires enough to open up a centimetre gap in which I was able to use long tweezers and screwdrivers to unclip the brackets, replace the bands, and put it all back together. It now works really well, so that was £7 well spent.

On Friday evening we went to see An Cailín Ciúin (or The Quiet Girl) at the cinema. Most of the dialogue is in Irish, and in a Munster dialect that’s not at all what I’m used to, but there were of course subtitles. It’s gently paced and beautifully and subtly constructed. I was in tears at the end, and I could hear sobbing behind me.

I made another piece of music for the Disquiet Junto, 10BPM Techno. I made some 128 bpm techno, then timestretched it by 12.8 times to get 10 bpm of something very different and ambient.

We had a small Eurovision party on Saturday night with a friend who lives locally. For the Italian theme, I cooked pizza, and L— made an absolutely excellent tiramisù from a vegan recipe that used oat cream and silken tofu to great a deliciously rich “cream” layer. I love the Eurovision Song Contest, and always put it in my diary early to avoid accidentally committing to something else. It’s silly, it’s campy, it’s spectacular, and it’s often very funny. I was a little sad that my favourite entry, the catchy, slightly sinister Breton-language folk/EDM banger from France, didn’t do better. I hope Ukraine manage to host it in Kyiv next year.

We saw the Yayoi Kusama installations at Tate Modern for a second time on Sunday.

Unfortunately, there’s still a high level of coronabollocks about the experience. You still need a ticket to get in, and there’s still only one way in and one way out, and that still isn’t signposted until you get to the wrong door, and there’s a lot of arguing as the fluorescent tabard wearers enforce the rules.

(I define coronabollocks as nonsensical restrictions, both those that were always specious, like when the government made it illegal to sit on a bench, or when pubs made you walk all the way past every table via a one-way system to get to the toilets, but especially those that have outlived their initial reasoning and yet persist because organisations come to find them convenient to their operations. In the latter category is the ticket system for the Southwark recycling centre. In the antepandemic era, you turned up whenever you liked with ID to prove your residence. Now, you must plan when you will have garden waste at least two days in advance. If only the weather were so predictable.)

As a member, however, you can now just walk in without a ticket (although still only via one set of doors) and see whatever you like. Except for one thing: the Yayoi Kusama installation. I was organised enough to snap up some tickets for a repeat viewing when they opened up a new batch several weeks ago.

Afterwards, we walked along the river in the rain to Oxo Tower for London Craft Week. There was an interesting range of work on display, from Taiwanese fabric dying using mud and indigo, to beautiful and astonishingly detailed model houses, to bowls filled with ceramic ivy flowers (made by dipping and firing real flowers).