Along with eight other people, I presented a lightning talk at LRUG on Monday night. Twenty slides, twenty seconds each, with automatic advance, a bit like Pecha Kucha or Ignite. 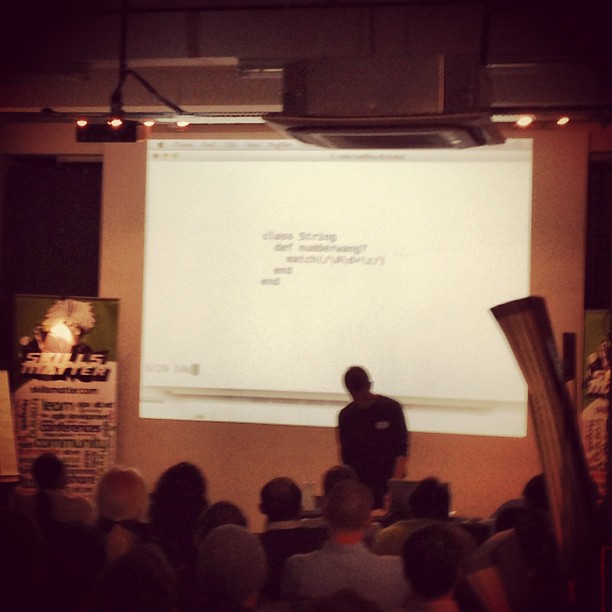 I talked about addition and subtraction in Ruby, coercion, and how to subvert it to make Ruby treat numbers and strings with reckless abandon. I also defined a method called numberwang?

Skills Matter kindly recorded a video of the talk. (Unfortunately, the video is rather small on their site, and the access settings mean that you can’t watch it on the main Vimeo site, but get-flash-videos will let you download and watch it at a sensible size, if you like.)

Rather than mess around with the infinite time-sink of presentation software, I just wrote out what I wanted to say in Markdown format, with horizontal rules between slides, then wrote a few lines of Ruby to extract the slide contents, centre them in the terminal, and advance after 20 seconds. It worked out pretty well.

The other possibly interesting fact is that all the Ruby in my slides was evaluated. I wrote a small script to take everything that was marked up as a block of Ruby code, evaluate it, and replace any # => comments with the result of evaluation, ensuring that everything I said actually worked!

All the source documents for the talk are in a Git repository on BitBucket: I took advantage of their free private repositories to store my talk privately before the event, then opened access after I’d presented. Very handy.

Thanks to Stuart Eccles for the timely photograph.