I’ve updated the GUI with the latest counter-counter-measures as of 11th June.

I don’t use Windows. Can’t stand it, personally. All those constant hectoring yellow bubbles drive me spare. ‘Your computer is vulnerable.’ No shit, it’s Windows. If you unplug a USB device and plug it back into a different socket, it spends five minutes walking you through reinstalling the drivers. It’s a horrible platform to develop on, and not much better as a target. The malevolent impact of Internet Explorer alone on web development has probably cost the world economy millions in lost productivity.

Sorry, I’m venting. I’m not saying you’re an idiot for using Windows, but, well, it wouldn’t be my choice. However, it’s still popular, at least at the low end of the computing market. It’s the most used operating system.

And iplayer-dl is a pain to get working on it. That’s a shame.

So, after fobbing people off with the genuine excuse that I don’t know much about Windows, I’ve decided to do something about it. Why? Because I think the true disruptive potential of iPlayer downloads has been held back by installation difficulties.

I’ve decided to open Pandora’s box, and make downloads available to all.

To that end, I’ve spent a lot of time this weekend working out how to write a graphical Ruby application for Windows, and how to package it up so that it’s easy to download and use. I think I’ve cracked it.

Try downloading and running this application:

There’s no installer or anything: just run it from wherever you like.

This application has failed to start because MSVCP711.dll was not found. Re-installing the application may fix this problem.

Then you need to get hold of a couple of DLLs. I’d love to distribute them myself, but I don’t think I’m allowed. A bit of googling will find them, or you can just use these links:

Unzip them and put them either in the c:\windows\system32 folder, or in the same place as ipdl.exe

Type a programme ID or URL into the box, press download, and you’ll be asked where to save the file. Where possible, this will be pre-filled with the name of the programme: 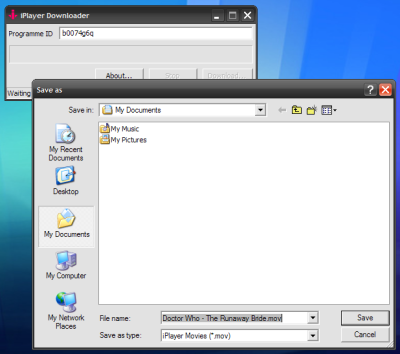 That’s it, really. Have a go, and let me know how you get on!

Oh yeah, licensing: the .exe is actually a self-extracting amalgam of my code, Ruby, and some supporting libraries. My code is MIT, but the other components are under their own licences. The COPYING file in my repository contains more information.

The GUI is missing some of the niceties of the command-line tool—there’s no obvious way to configure a proxy, for example. I may add this, depending on feedback.

Linux users aren’t left out, by the way: the GUI works very nicely in X11—in fact, that’s how I developed it. I’ll prepare a release soon, along with some explanations of how to install it.