Perhaps unsurprisingly, every news bulletin I’ve heard today has led with the Kent earthquake. Just to put things into perspective, though, here’s a map of quakes in the last week in Japan, taken from the USGS site. 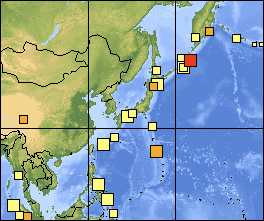 So the UK has had one magnitude 4.3 earthquake; meanwhile, Japan’s had five of magnitude 4 or greater this week alone!

As south-east England’s strongest earthquake in four centuries, it’s definitely unusual and newsworthy. I couldn’t feel it here in London, but, having experienced a few moderate earthquakes in Japan, I can understand the response, too: an earthquake is really quite scary, especially the first time you feel one—and I expect that most people who felt today’s tremor would have been doing so for the first time. However, in the grand scheme of things, it could be much worse!