There are a couple of fast trains from Osaka to the Hokuriku area. One type is called the Thunderbird (サンナーバード). The other is called the Raichō (雷鳥) which means “thunder bird”. Confused? In fact, although the literal meaning of raichō is “thunder bird”, it really refers to a non-mythical type of bird that I am reliably informed is a ptarmigan.

We took the Thunderbird from Osaka. It actually looks a lot like a Shinkansen (新幹線) train, both inside and out, although it doesn’t run on the special extra-wide tracks used by the Shinkansen. We stopped off in Fukui (福井) for the afternoon to eat lunch (Chinese noodles) and decided to walk to the walled garden of Yōkōkanteien (養浩館庭園). Unfortunately, it was closed on Mondays. With that, we decided that there was nothing more to see in Fukui and headed on to our next stop.

The ryokan that we stayed at, Seifūsō (清風荘) is enormous and, at least from the outside, quite ugly. The room itself was small, but actually quite large enough for two people.

As is usual at a ryokan, our dinner was served in our room (Japanese-style rooms are remarkably easily reconfigured for eating, sleeping and general use). Out of a choice of steak or crab as the main dish, I chose steak—I like crab, but I find it too much of an effort to get the meat out of the exoskeleton. N——, having gone for the crab, came to the same conclusion. In addition to being delicious, the quantity of food was exceedingly generous—we didn’t need any of the rice that was offered at the end of the meal.

The woman who served us tea and dinner in the ryokan seemed very concerned about me as a foreigner—specifically, my ability to fit in and not screw something up. She made sure to explain the correct way to wear the yukata, a garment on about the same level of complexity as a dressing gown. Left over right, not right over left—unless you’re taking the starring role at a funeral. “死んでないです”—“I’m not dead,” I told her.

Being an onsen, or hot spring, the hotel had a huge public bath. The Japanese do, in general, love bathing, and although I was initially reluctant about wandering around naked, living in a Japanese dormitory for a year at university accustomed me to it. Besides, I can’t actually see very much without my glasses or contact lenses, so I wouldn’t notice even if anyone did stare at me. In fact, I even enjoy the large, hot baths—although they do seem like potential breeding grounds for nasties like legionnaire’s disease.

On this occasion, I was rather disappointed at my inability to see—there was a man at the next shower with a full-body Japanese-style tattoo covering his back from neck down to and including his buttocks, along with both upper arms and his chest. The Japanese invariably associate such tattoos with the Yakuza, which may not be entirely accurate. I don’t know whether the man in the bath was a gangster or not; if he was, then it was probably for the best that my poor eyesight prevented me from taking too close an interest in his tattoo.

I must admit, I think that those Japanese tattoos are very impressive. They are quite artistic, even if they are fairly formulaic (dragons, koi, Buddhist imagery and waves). Certainly, they are generally more artistic than the “Western-style” tattoo I spotted on an arm at Frankfurt airport the other day of a very badly drawn flaming skull! They also represent a significant investment in time, money…and pain.

I woke up unreasonably early the next morning, and decided to head to the bath once again, around 06:15. I washed first—etiquette demands that you wash before getting into a shared bath, which is just as well when you imagine the effect that dirt and soap scum from several hundred people would have in a bath the size of a small swimming pool! I soaked in the big indoor bath, headed to the sauna—where, coincidentally, I encountered the tattooed guy from the previous evening—and followed it with a shower before getting into one of the outdoor baths. It was amazing to sit, submerged up to my shoulders in a hot bath, with the brisk morning air around my head and the air still misty in the distance. I came out feeling more relaxed than I had in a long time. 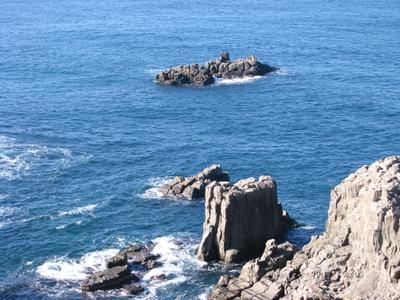 Before leaving Awara Onsen, we took a bus up to the coast to see Tōjinbō (東尋坊), a rocky outcrop where the rock strata seem to be pointing entirely the wrong way: straight up. It looks dangerous, and probably is, judging by the “don’t kill yourself here” signs. Although the Korean peninsula is not that far across the other side of the Sea of Japan, close enough for North Korean submarines to abduct people from time to time, it’s distant enough that you can’t see anything on the other side of the water, even on a cloudless day. 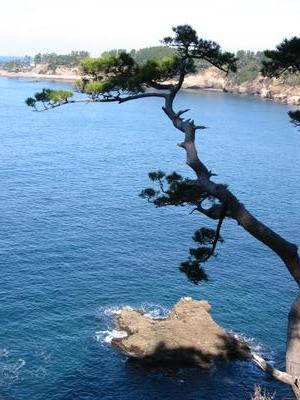