I upgraded my iBook to the latest version of Mac OS X, 10.3 or ‘Panther.’ It went almost without incident, although I did regret not having deselected the more obscure language options as I watched it installing support to run the interface in Norwegian, Traditional Chinese, and a list of other languages that I can’t read. It was a waste of disk space and, more importantly, time.

Be that as it may, it worked in the end.

The big new feature, ‘Exposé,’ is fantastic. It’s a clever way by which, at the press of a key, all the windows on screen are shown shrunken and side by side, allowing you to pick the one you want. The way that the windows are tesselated together to fit the screen is graphically and technically elegant, while using the graphics hardware to scale and render windows ensures that it is all executed smoothly and rapidly. It’s hard to express quite how useful it, but I’ve used scores of times in just one day.

A more obscure feature, but one that is personally interesting, is the addition of Ainu language support to the Japanese input method. Ainu, briefly, is an aboriginal language of an ethnic group native to northern Japan, principally Hokkaido, most of whose speakers were culturally eliminated by the spread of the Japanese and their culture. (Insert snide comment about how bogus the claimed homogeneity of the Japanese is.)

As an experiment, I switched to Ainu input mode and typed one of the few words in that language that I know, ‘irankarapte’ (‘welcome’). The symbol in the menu bar between the speaker and battery is the symbol for Ainu input. 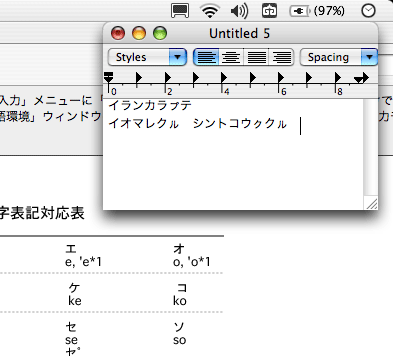 It transpires that Ainu writing is a modified version of Japanese katakana. For example, the isolated ‘p’ consonant, unsayable in Japanese, is rendered by a small ‘pu’ character. There’s a huge chart in the help files that shown how to type every one of the characters or combinations used in Ainu, and there are a lot of them—many more than are used in Japanese.

Although I doubt that I’ll be using it again in the near future, it piqued my interest. It does confirm my growing belief that Mac OS X is the linguist’s operating system par excellence. The level of character support is far in advance of anything else, and I find that the font anti-aliasing makes it much easier to read dense and complex characters.