Parakeets have moved into our neighbourhood. They’ve been in London for years, especially in the west, and I’ve seen one or two in Russia Dock Woodland in Rotherhithe on a few occasions, but they’ve suddenly arrived en masse in the past fortnight. I hear their distinctive cry more than I see them, but I’ve seen them in neighbours’ gardens and on our roof this week, and I saw a flock of at least half a dozen while walking home yesterday. I wonder what has brought them here now.

We took part in a pub quiz at the Tiger in Camberwell on Wednesday. We didn’t win, but it was fun. It’s quite different from the quiz at the Mayflower. That one has a lot of very difficult factual questions. This one had more questions that are guessable but harder to know, like, “Which is older, the original Nintendo Game Boy or Jennifer Lawrence?” I’m not sure which I prefer.

I did enjoy the pint of beer I bought for £3.30. Not quite the cheapest this year – that was £3 at the Telegraph near New Cross in April – but a close second. It must have been a happy hour rate, because when L— bought the same half an hour later, the price had gone up to £4.50.

It’s looking pretty bad for pubs, restaurants, and shops, who are faced with even higher increases in their energy bills than domestic users. You can add to that the decreased spending power of people whose money is going on light and heat instead.

More than 70% of pubs expect not to survive the winter. We’ve already lost our favourite bar, the Full Nelson in Deptford (previously). It’s going to be grim if only the chains survive.

We’re now under a hosepipe ban, which of course heralded a couple of days of heavy rain. Not enough rain, though, I’m sure. According to the rules, you can’t water a garden or wash your car with a hosepipe (“private motor-vehicle (and trailers)”), but non-motorised vehicles aren’t mentioned. So you can hose down your bicycle, I think. But what about if you hose down your bicycle on the lawn and the grass is watered incidentally?

We don’t have a lawn, though.

I made a new jack plate for my travel electric guitar. It’s a fun little Pignose guitar with a built-in amplifier (similar to this) that I bought in an outlet shop in Japan (there’s a minor blemish in the finish) in 2002 or thereabouts, and which now lives in the living room so that I can pick it up whenever I like. It plays very well, but it has one unusual component: the jack plate holds both a normal quarter inch jack socket and a 3.5mm headphone socket. On mine, this is a somewhat roughly made piece of plastic. Under the stress of the curvature of the lower bout, over a few decades, it cracked.

Because it’s a peculiar part, I couldn’t find a replacement of the right size and curvature, so I made one. I used 1.5mm aluminium sheet, cut, filed, drilled, and countersunk, and brought it up to a shine with sandpaper from 1000 to 10,000 grit and some silver polish. It looks perfect – in fact, I think it looks better than the original. 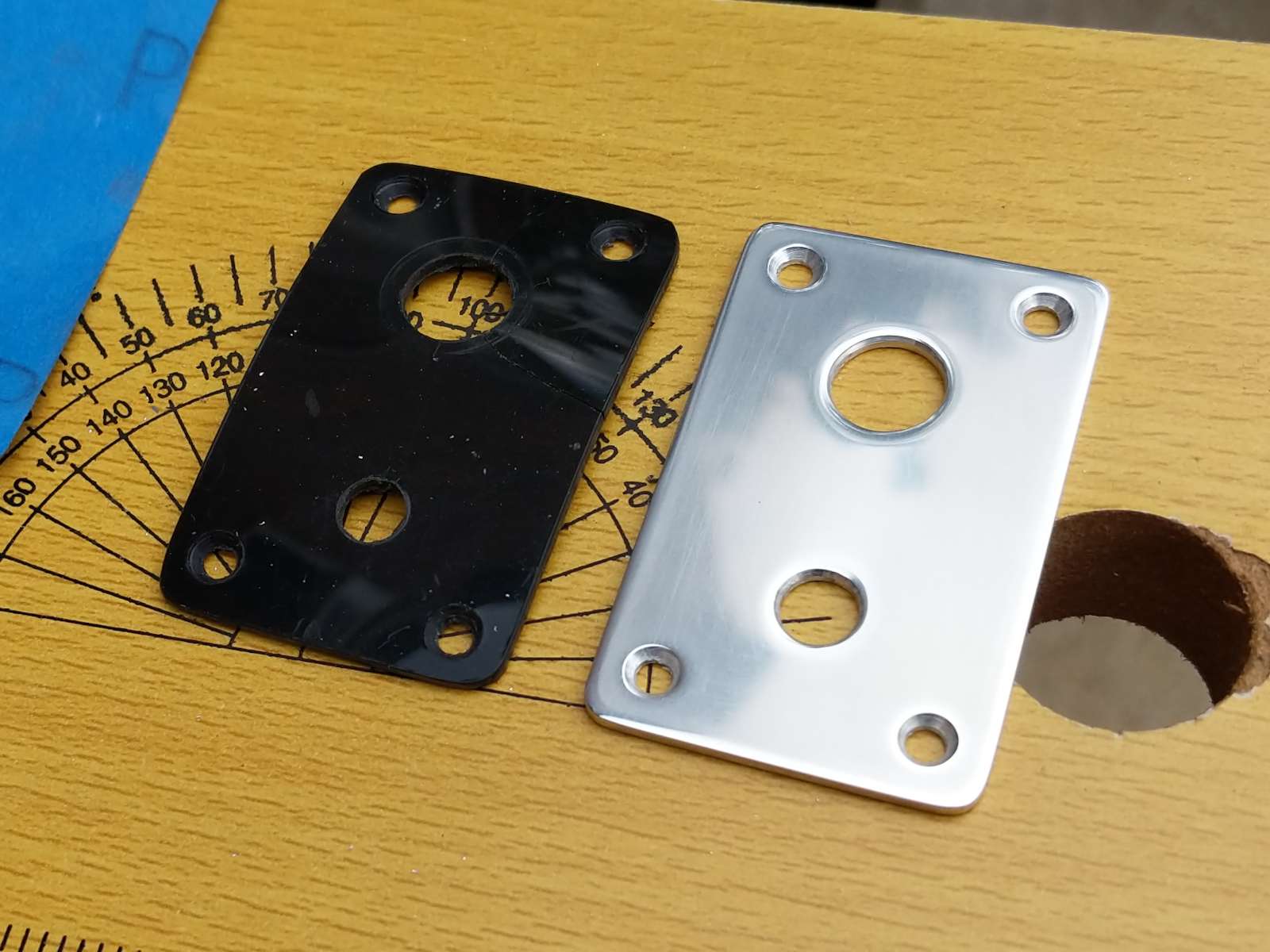 But I still had to bend it to the curve. I printed a positive and negative form on my 3D printer and pressed it between them, and it now fits well. It could be better: I made the curve slightly tighter than needed, to accomodate a bit of springing back, but aluminium isn’t very springy so I probably shouldn’t have. It’s barely noticeable, though. The only trouble is that the old quarter inch socket broke when I unscrewed it. It’s a cheap and common part, but I don’t have one so I’m waiting for a replacement in the post. 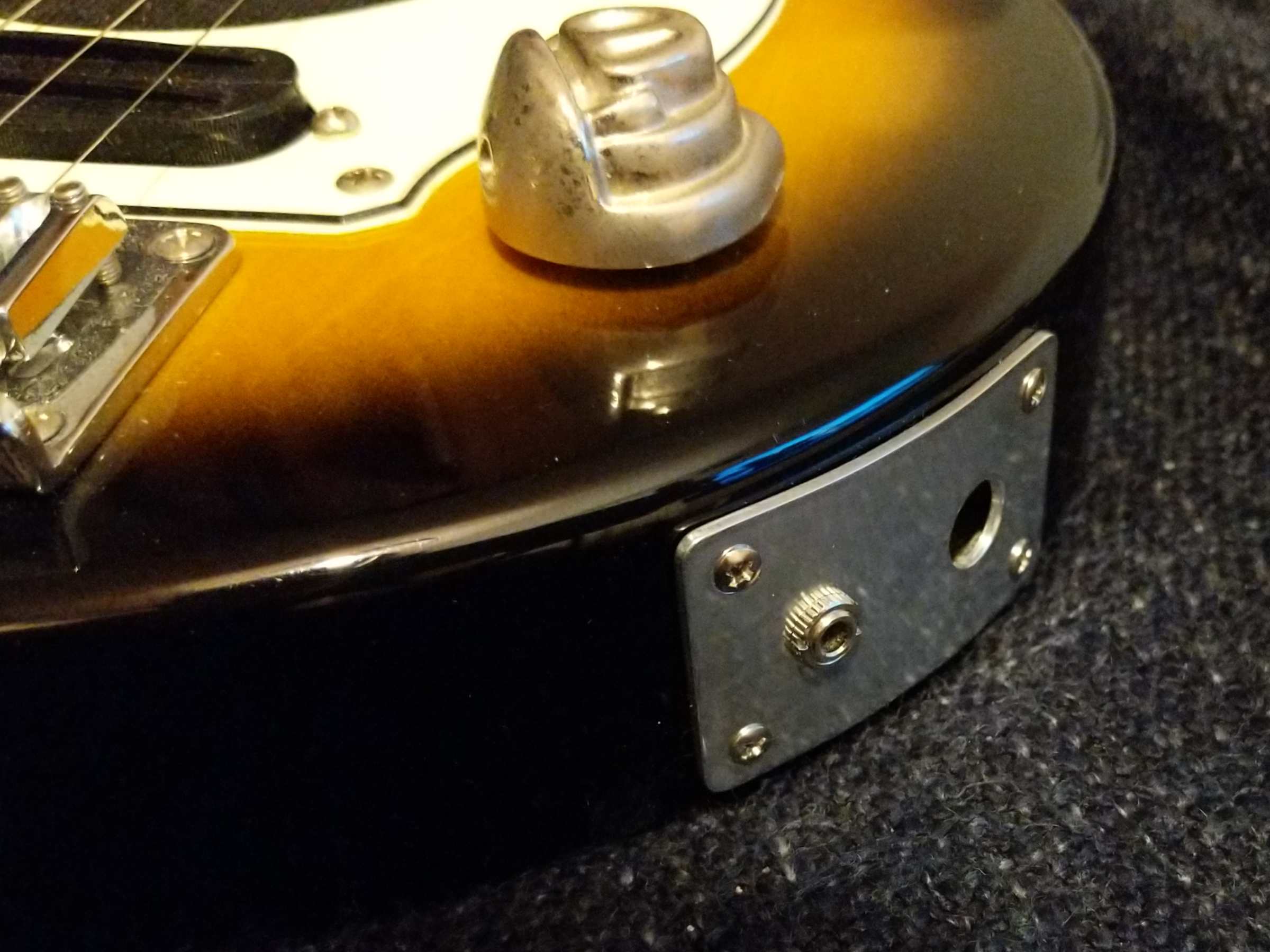 I fixed a Line6 Pod Pro rack-mount guitar processor that I scored cheap on eBay. The design flaw is the PCB-mounted power transformer: if it gets a bump, the mass is enough to pull the legs out of the transformer and snap the fine wires that make up the primary coils. It’s braced against the board with a cable tie, which works to prevent that, but only up to a point. This had passed that point. 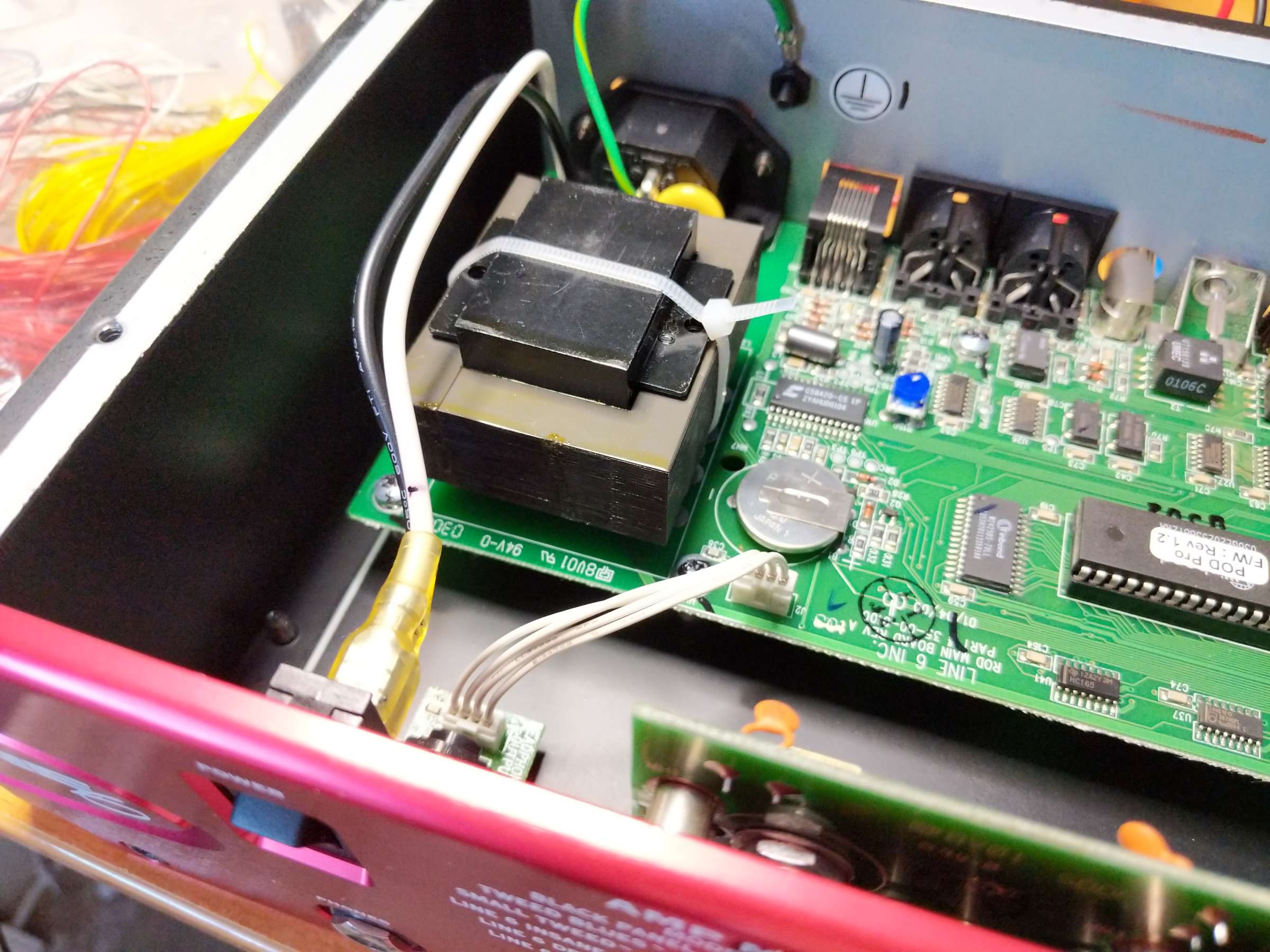 I made new legs for the transformer from heavy copper wire and soldered extensions to the stumps of the coil wires, and reinforced it with a new cable tie. It’s good for now, as long as it doesn’t get another bump. I plan to sell it on, though, so I’ll see if I can make it more robust.

For the benefit of posterity, or anyone else looking to fix one, it’s nominally a 115/230V to 10V 20VA transformer, although I actually measured the output at 11.8V AC, and I’ve read of people having success with 9V transformers.

In the meantime, I had a play with it, and managed to coax out a Hysteria-era Def Leppard tone rather easily. I think that’s back in again, though, isn’t it?

We took a day trip to Brighton on Sunday. We started off with doughnuts from Glazed, now a tradition for us. The coffee was excellent: they have a new roaster, Tigermoth, who seem to know what they’re doing.

We went to the beach, of course. The skeletal ruined pier is even more skeletal than last time I saw it, and I don’t think it will last many more years at this rate. We wandered around the independent shops and junk markets, and found a few interesting things, and I fell asleep on the train back. A perfect day out, really.

On a related topic, I’ve been experimenting with coffee brewing methods. I had a bag of beans that I really wasn’t enjoying, so I tried adjusting some variables. I ground it courser, and that made it much more palatable. I was brewing it using a pourover method, so I made it in an Aeropress instead; the immersion improved it further. It’s now a very tasty cup of coffee, not that there’s much left of the bag.

A third of Pakistan is underwater and 33 million people have been displaced by the flooding. The scale just seems unimaginable, doesn’t it?