My right elbow was a bit uncomfortable at the start of the week. I’ve been using a finger trackball (currently this massive trackball) instead of a mouse for a decade and a half specifically to avoid this, but sometimes the only solution is some actual rest. I spent Monday and Tuesday consciously taking a break and doing things that didn’t require much of my arms, and especially that weren’t in front of the computer.

In the course of this break, I watched most of Raised by Wolves. The presentation of the Mithraists certainly raised my eyebrows: it was more of a search and replace on Christianity than anything much to do with the actual historical Mithraic religion. But it stops them offending any followers of an extant religion, I suppose. It’s not particularly original – antagonistic settlers in a new world have to co-operate to survive – but it’s quite fun, and there’s an enticing level of mystery from the unknown planet and its flora and fauna. I still have a couple of episodes left to watch, however.

I rebuilt my passive ring modulator using matrix board instead of stripboard. As well as taking up less space, it works this time!

I thought the Gamestop/WallStreetBets/Melvin Capital shenanigans were hilarious. Retail investors are supposed to be chum to the sharks of Wall Street, but they got a few bites of their own in before the platforms stopped accepting purchases and reminded everyone that share trading has not, in fact, been democratised. I don’t think there are any good guys in this story, really, but it was entertaining to watch.

I discovered a dead button on my neomonome. It lit up, but pressing it did nothing. I was worried that I might have to replace the whole board, but on closer inspection, the problem was pretty obvious: I’d knocked a tiny 0402 diode (from the scan matrix, presumably) off the back of the board at some point. I had a spare 0603 part that I was able to fit onto the pads, so it was an easy fix in the end. You can hardly even tell, but it’s the one above the second s of seesaw, and you can also see the board-to-board wiring that was such trouble to solder flat: 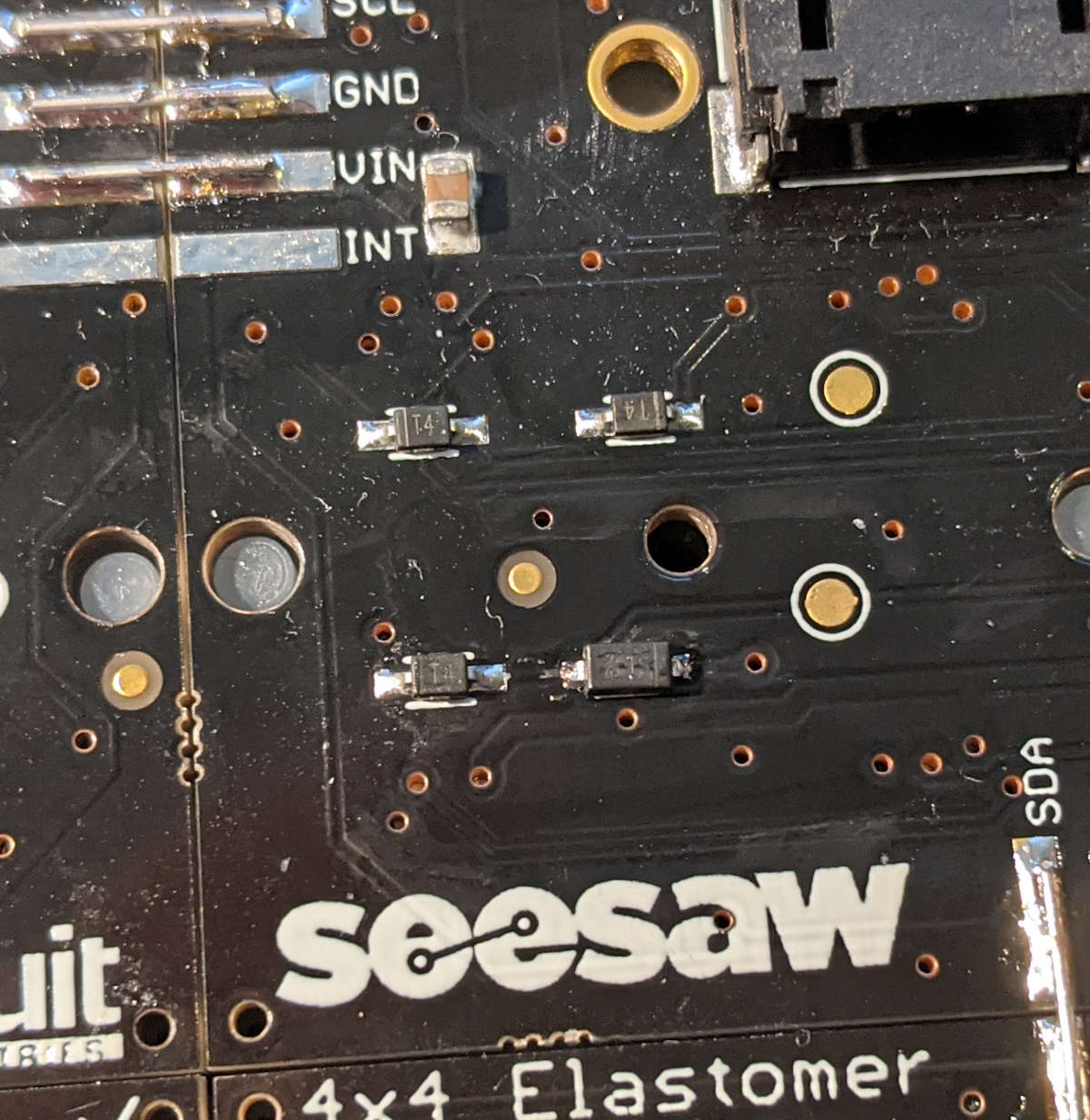 I’ve been experimenting with sound design. After listening to an old episode of Song Exploder with Nine Inch Nails, I looked up the experimental musical intrument mentioned, the Luminist Garden. That gave me an idea about how I could create a similar effect electronically: piezo microphone into resonator into delay and reverb with feedback. I tried it out the next day. It might not be quite the same, but it’s a really pleasing effect, especially when combined with changing the pitch of the resonation.

I walked a total of 40 km this week. Although walking along the river is very pleasant, I feel like I need a bit of variety, so I’ve decided to print out a map, mark off every road I’ve visited in the area, and try to walk along the ones I haven’t.