Like a lot of other people in London, I was moved to get down to Downing Street straight after work last Wednesday after the news broke about the Johnson administration’s cunning wheeze to suspend Parliament. 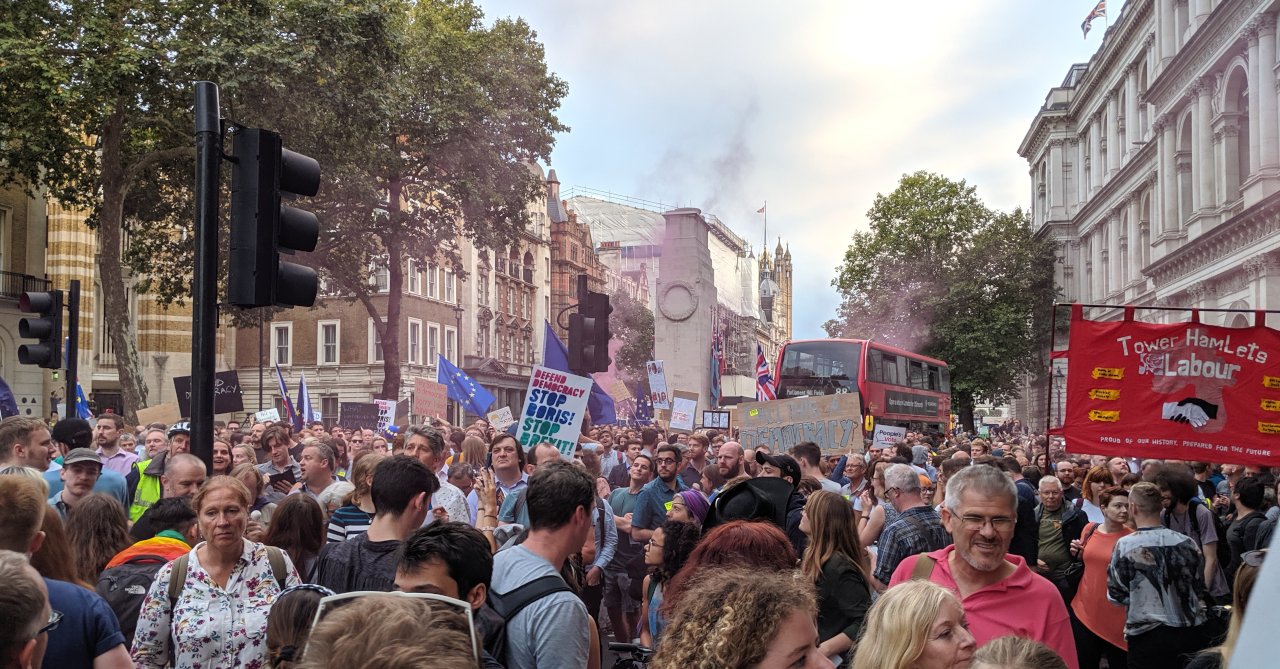 It’s certainly proven the emptiness of one of the justifications of the monarchy: that it provides a safeguard against tyranny. Last week it was shown to be pointless. It is the prime minister who really enjoys the royal prerogative; the monarch is just an implementation detail. For a while, #AbolishTheMonarchy became the top hashtag on Twitter in the UK.

But you’re just over-reacting. It’s not a coup!

Well, it hasn’t happened yet, but it had enough of the indications of an attempted self-coup. Apart from some kind of aloof satisfaction, what’s the point in holding back our language when they call us collaborators, saboteurs, citizens of nowhere, and enemies of the people? Especially when they’re trying to do something outrageous.

But it’s perfectly normal for Parliament to be prorogued before a Queen’s Speech.

Yes, for a few days or a couple of weeks at most. Not for five weeks. And especially not for five weeks at a time when the country hurtles towards the cliff edge of the abrupt overnight severing of fifty years of social and economic integration.

But Parliament was going to go into recess for most of that period anyway, for the party conferences.

Recess is not the same thing as prorogation: no committees sit, any bills fall away, and the executive rules unchallenged. And Parliament decides whether and how long to go into recess for itself.

There’s the government’s own Domestic Abuse Bill. That sounds important. So is preventing the government from sabotaging the relationship with the rest of the EU and forcing the UK to crash out for narrow party interest by making sure that Parliament has no time to stop them.

Although there’s a limit to what protest can achieve, I do think we achieved something. We showed that there is strong opposition to constitutional tricks to silence Parliament. Once upon a time, we were told that Brexit supporters would be out on the streets if the UK didn’t leave the EU on 29 March, that we had to appease them to stop the inevitable violence, but that date came and went.

The idea of an executive coup, on the other hand, mobilises a lot of people. Enough people to fill up Whitehall last Saturday. Enough people to put Johnson off his speech by chanting “Stop the coup!” outside the gates of Downing Street on Monday night. Enough, perhaps, to persuade some Tory MPs to look around and realise that they were being led by the baddies.

For now, it looks like the Johnson/Cummings plan has failed. The government has lost its majority, and expelled twenty-one of its more moderate members by withdrawing the whip. Even the Prime Minister’s own brother has quit the government and the party. The Conservative Party is shrinking before our eyes into a smaller and smaller, nastier and nastier, populist English nationalist form. It’s in government, but not in power, and can’t even get an election.

However, we’re now in a world in which the old constitutional conventions are shown to be just that: conventions that lack teeth in the face of an adversary determined to do anything. Johnson says he’d rather “die in a ditch” than request an extension to the Brexit deadline, despite the pending legislation mandating him to do so. We can’t trust them with conventions, and perhaps we can’t even trust them to obey the law.

The Conservative and Unionist Party tried to save itself with the EU referendum. It will end up destroying everything, including the meaning of every word in its name.