Korean pickled food is amazing stuff. It’s a technique that can take something as boring as cabbage and turn it into a piquant, invigorating delicacy. And it’s easy to make at home. 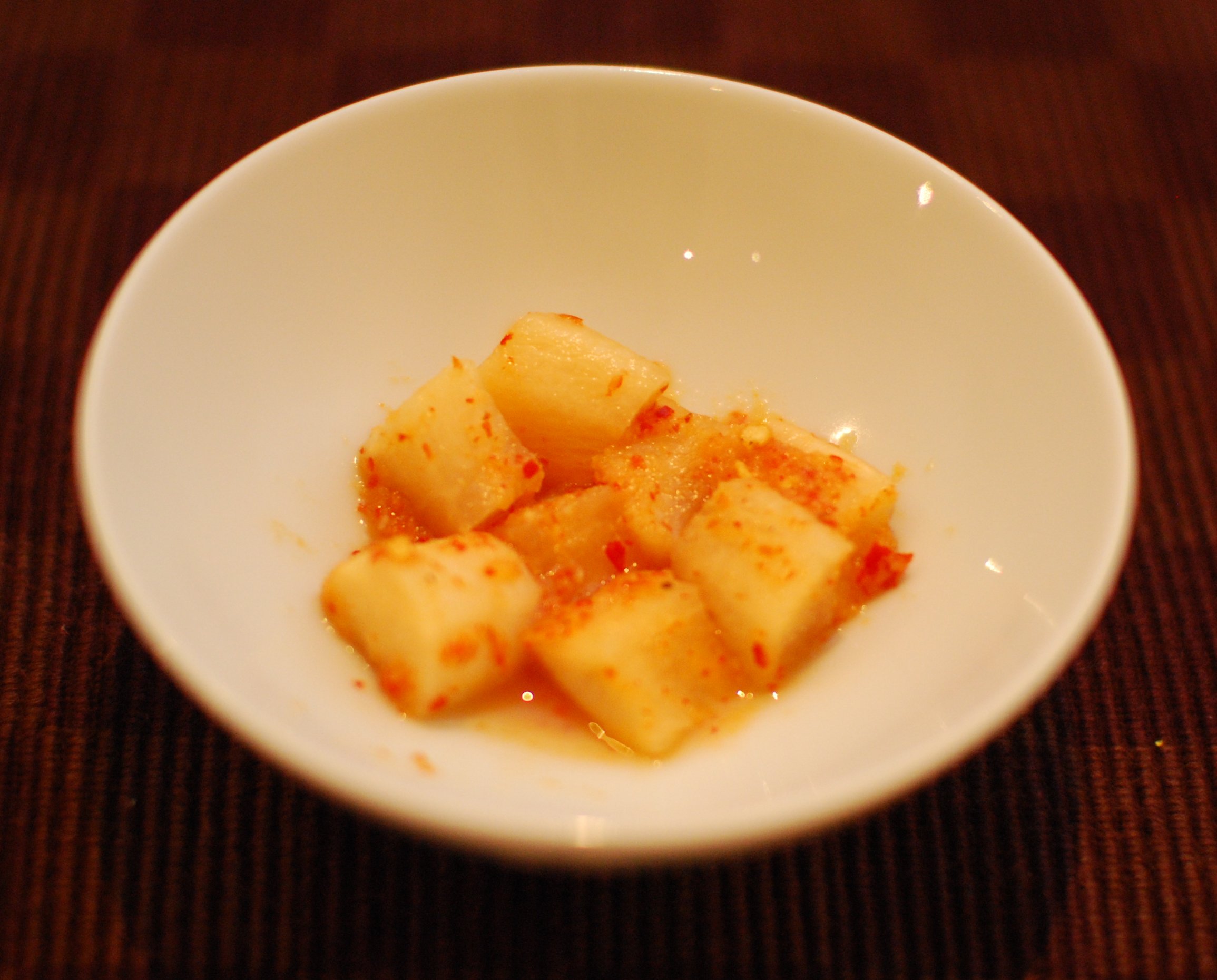 In fact, Korean food in general is delicious and yet, scandalously, it doesn’t seem to be very popular in the UK.

Kimchi (김치)—pickled Chinese cabbage—is probably the best-known Korean pickle, but there are many variants. One of my favourites is kaktugi (or kkakdugi, or whatever) (깍두기), which is made from giant radish.

You can buy kimchi and kaktugi in shops if you live somewhere with a measurable Korean population. Having lived in places where you can’t, I’ve learned to make it from scratch. Not only is it easy and satisfying, you’ll usually end up with something better than you could buy in a shop.

Here’s how I make it. I’m going to be vague about quantities; I’ll assume that you’re a competent chef and can figure it out yourself. In any case, the amount of chilli and such is a matter of personal taste.

First, take your main vegetable. For kaktugi, you want some giant radish (also called daikon or mooli depending on where you buy it). Chop it into 1.5 cm cubes. For kimchi, take some Chinese cabbage and chop across into 3 to 4 cm lengths.

Place the chopped vegetable in a zip-lock bag and salt generously (with sea salt: this is important). Work the salt in with your hands.

Seal the bag and leave to stand for 3 hours or so, manipulating occasionally to ensure that it’s evenly distributed. A large volume of water will be expelled (via osmosis) from the vegetables during this process.

Next, make the seasoning: blend garlic, ginger, dried red chillis, fish sauce (oysters are traditional, but I use Thai nam pla as a readily-available substitute), and a little water into a paste.

Take handfuls of the salted vegetable and squeeze out any excess water. Put in a bowl and work the paste all over the vegetable.

At this point, you can add any other ingredients if desired: finely chopped spring onion; carrot; etc.

Put the seasoned vegetable into a jar and pack down tightly.

For the first day or so, leave the jar open and apply a weight to the top of the vegetable—a beer bottle full of water works well. The idea here is to push the solid material down below the level of the liquid exuded. Pack the whole lot in a plastic bag—it will smell!

After a day, put a lid on the jar. Leave at room temperature for another day or two or three, according to preference. Then transfer to the fridge. I don’t know how long it lasts. It’s never been an issue!