Web developers hate Internet Explorer 6. It was released in 2001—way back in the free, pre-dystopian days before 9/11—and all but abandoned by Microsoft shortly afterwards. It received a few security fixes, the last of which came in April 2008, but no new functionality. To be fair, back in 2001 it was a far better browser than most of the competition, but its stasis since then has harmed web development. IE6 doesn’t fully support version 2 of CSS (released in 1998!). Its JavaScript engine is slow. It exhibits a number of infuriating layout bugs. None of this would matter if people weren’t still using it, but, alas, a large enough proportion of the masses still clings to it that no commercial enterprise can afford to ignore IE6. Web development is thus hobbled, restricted to the lowest common denominator by the inadequacies of Internet Explorer 6.

Internet Explorer 7 was released in 2006, and version 8 is currently in beta and will be released shortly. There’s no excuse to be stuck on version 6, and web developers are beginning to revolt. A whole swathe of popular websites in Norway—including popular newspapers like Aftenposten and Morgenbladet—have started showing information boxes to visitors encouraging them to upgrade or switch their browsers. The first was finn.no (translation via Christian Johansen):

Heads up: You’re using an older version of Internet Explorer.

In order to get the most out of our website, you can get a free update of Internet Explorer. If you’re using a work computer, you should contact your IT administrator.

Other sites have added links to alternative browsers.

I’ve always used conditional comments to show a brusque message to visitors using Internet Explorer 6, inviting them to upgrade, but it wasn’t particularly visible. I’ve decided to take it to a new level of obnoxiousness in response to the Norwegian outbreak: 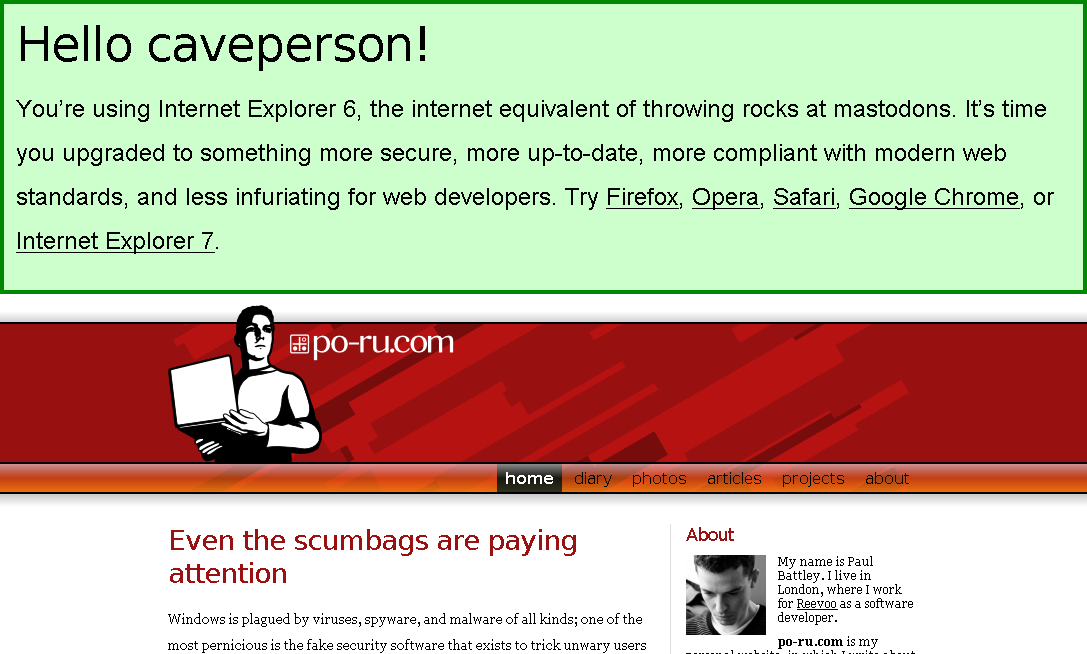 Only 26% of my visitors use any version of Internet Explorer; 5% are using IE6. But that’s still one twentieth, and it’s time they stopped! Let’s make 2009 the year that IE6 is finally buried.