Some might say that the rot set in with superstar footballers, quaffing Cristal between their sexual escapades. Others might go back further, and point to city traders swigging from their ostentatious magnums of whatever’s most expensive. In any case, it’s now clear that the downward social movement of champagne has now reached something of a nadir: it’s now the tipple of choice for allegedly violent provincial teenagers.

Giving evidence witnesses Joshua Cook, told the jury the group had been drinking champagne after a night out in the Clifton area of the city.

He said there had been a discussion about going out and mugging someone. 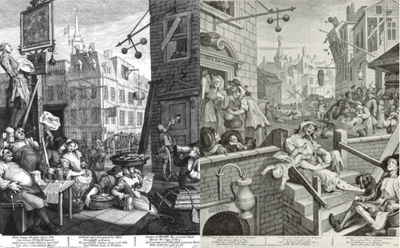 [It is] the principal cause of all the vice & debauchery committed among the inferior sort of people.

That was a Middlesex magistrate referring in 1721 to the intemperate consumption of gin by the masses, the moral panic of its day in the early 18th century, and the subject of satirical artwork.

Yet Mother’s Ruin is now just an essential component of the resolutely inoffensive G & T. Maybe, one day, even champagne will be classy again!