We rode the Shirasagi (しらさぎ) express from Kanazawa to Toyama. It was comfortable enough, except for the small fact that the heating was set at about 40°C—and the windows don’t open. Our forty-five minute journey was long enough to have a satisfying lunch of masu-no-sushi (ますのすし), a big circular block of sushi rice with a fish that I think is trout pressed on top.

Slightly before Unazuki itself is Oritate and the Unazuki Beer Centre (宇奈月麦酒館). It’s a small-scale brewery with a restaurant and shop attached. We both ordered the taster set: three 120ml glasses, one of each of their brews. Disappointingly, only one of them, the bock, was particularly nice. 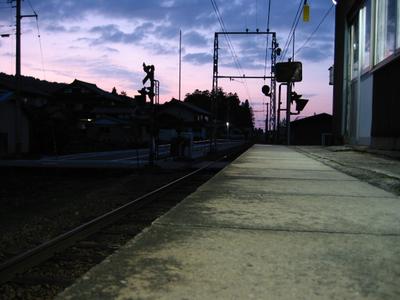 It was already dark when we arrived in Unazuki—night seems to fall early in the mountains, which would after all make sense from a physics point of view.

Unazuki is an onsen resort that opened about eighty years ago, or so I judge by the “開温80周年” (“80th anniversary of opening the springs”) signs around the place. In fact, the real hot spring is further up the Kurobe gorge (黒部峡谷) in Kuronagi (黒薙). Our hotel, the New Otani (ニューオータニ) thus offered a large, naturally-fed bath, which made the entire hotel smell a bit unpleasant, probably due to some sulphurous content in the water.

The accommodation was enormous—two rooms, a washroom with twin basins, bathroom and two separate toilets. All this was for two people—one of the benefits of travelling in a quiet season like late November, I’m sure. Once again, I took advantage of the bathing facilities that evening and the next morning—hot bath, hot outdoor bath (yes, they do have strategically-planted trees and well-positioned walls to spare the guests’ blushes) and Jacuzzi, although sadly not the sauna as it was “故障中”—out of order.

After a very satisfying dinner and a huge breakfast at the buffet, it was time to leave for the last day of our voyage. The hotel staff kindly gave us a lift to the station, all of seven minutes’ walk away.